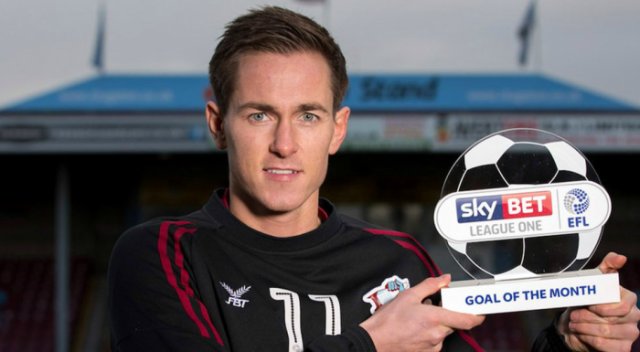 It would have been one of the biggest scandals football had ever seen had he not won it, but alas, Josh Morris has been awarded the Sky Bet League One goal of the month for November.

The Iron winger received 47% of a vote, which included goals from Eoin Doyle of Oldham, and Walsall’s Erhun Oztumer.

Lead Sky Bet EFL Goal of the Month judge and Sky Sports Pundit Don Goodman said: “Josh Morris has been one of the standout performers in the league for a couple of seasons, and seems to be capable of ever increasingly brilliant pieces of skill.

“Morris produced an unstoppable free kick from 25 yards just minutes before, but this goal was the pick of two sublime efforts. To be able to produce a strike with curl, pace and accuracy like that with your so called ‘weaker’ foot is outstanding.’’

📺 VIDEO INTERVIEW: Josh Morris reacts to his Sky Bet League One Goal of the Month award for November. pic.twitter.com/1wuQDIh0Or

“There were three great goals nominated so thanks to everyone who voted, everyone behind the scenes at the club and it’s a big thing for me to have.

“I got passed the ball with a man quite close to me but I managed to get away with a turn and it opened up for me to hit it with my right foot, so I thought ‘why not?’ and hit it really well and it went in the top corner.

“I don’t think I had many other options, it was either shoot or get tackled, and I’d just scored a couple of minutes previously so my confidence was high and decided to hit it and thankfully it went in.”
https://platform.twitter.com/widgets.js