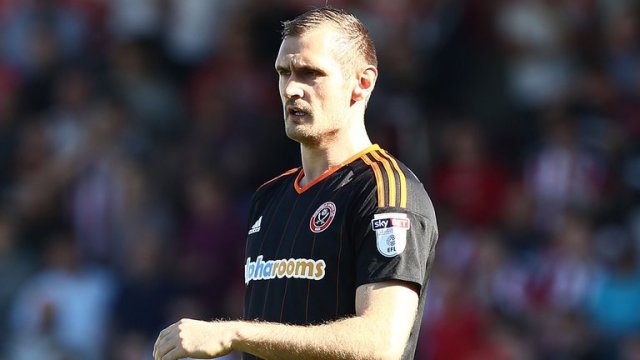 The Iron have been heavily linked with a move for Sheffield United striker James Hanson, after it emerged that the target man turned down a move to League Two side, Mansfield Town.

Hanson was signed by the Blades in January from Bradford City, as a player they hoped would help them get over the line to promotion from League One.

The 29-year-old made 13 appearances for last year’s League One Champions – including scoring a goal on his debut – but is thought to be out-of-favour with the club now in the Championship.

The only appearance Hanson has made thus far this season was during the Blades’ 3-2 EFL Cup success over Walsall last Wednesday.

The forward was plucked from non-league side Guiseley by Bradford in 2009, and went on to make 335 appearances in all competitions during a eight year stay for the Bantams, scoring on 91 occasions.

HITC were the first news outlet to reveal the Iron’s interests, with their claims suggesting a ‘source close to the club’ had revealed our intentions.

Since then, James Shield of the Sheffield Star has confirmed that there is legitimate interest.

Meanwhile, in other news, I understand Scunthorpe have expressed an interest in signing James Hanson. #sufc #twitterblades

//platform.twitter.com/widgets.jsDespite the link, the club have remained coy on the transfer, with BBC Humberside presenter Mike White claiming no one at the club would make a comment on the speculation.

Currently nobody available for comment at Scunthorpe United on reports linking them with Sheff Utd striker James Hanson. #sufc

It is thought that the Blades aren’t in a rush to sell Hanson, but if the Iron can match what they paid for him in January, then he could well be on his way to Glanford Park.
//platform.twitter.com/widgets.js