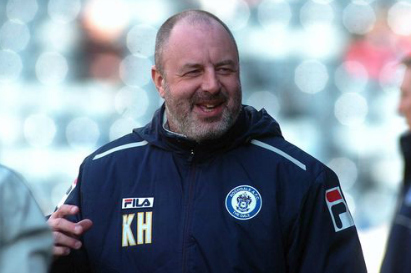 After last Saturday’s opening day draw against AFC Wimbledon, this match presents the Iron with an opportunity to pick up their first three points, and first victory in the regulation 90 minutes.

A hard-fought win in the first round of the Carabao Cup in midweek will certainly not have dampened our hopes of a win come kick off tomorrow.

It will, however, be an early test of the squad’s fitness. Going 120 minutes is demanding both physically and mentally, so I am expecting to see a certain amount of resolve to see us through what is always a tough game at Spotland.

Additionally, speculation has been rife over the future of hardworking striker Tom Hopper, as his move to League 2 Mansfield fell through this week.

Reports are suggesting that offers from League 1 teams are being considered, and the ex-Leicester City forward could well be on his way before the end of the window.

Unrest in the squad is never beneficial, thus requiring an extra level of professionalism leading into our first away match.

In my opinion, Rochdale away last term began our slow spiral of shaky performances which, ultimately, cost us promotion.

This time around we face a different task to get us up and running. In a competitive division such as this, momentum and consistency is key; with results, performances and players.

Don’t get me wrong, I do do not consider myself a master tactician. That does not, however, disqualify me from being entitled to an opinion.

It is clear to me that 4 at the back is the way to go with the players we have at our disposal. It provides the width and space that flair players like Holmes and Hakeeb require whilst also allowing Mantom to boss the midfield: as we all know he can.

Paddy Madden is working towards breaking into the club’s top 10 goal scorers of all time. He needs to score twice to write himself into the Scunthorpe United history books. This motivation should be enough to see Paddy included in the line-up.

Neal Bishop and Josh Morris could both miss out with the knocks they took against Wimbledon and Notts County respectively.

Bishop would be a huge miss after a terrific first half display against the Wombles, but we have Ojo and Mantom at our disposal for central midfield duties.

Josh Morris was underwhelming in both matches. Unfortunately, the star man for a large chunk of last season is now seemingly bereft of all confidence, struggling to take on a man or even strike one of his trademark set pieces with any conviction – which is a real shame.

Overall, optimism is high going into this match, I expect a tough match from Dale and a very tight affair.

The eternal optimist in my heart is telling me that we’ll pick up 3 points rather simply.

However, football is never quite like that. I expect a draw on the day, but I hope I can be proven wrong.