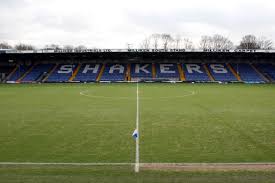 With the clash against Alan Knill’s old club less than a fortnight away – Scunthorpe United have released the ticket details regarding the League One clash.

It will be the first time Knilly has been back to Gigg Lane since leaving the Shakers late last season, and will take place on Tuesday 20th March.

Just like Oldham was – the game is solely a pay on the gate affair, and no tickets are available in advance for any of the away fans.

The prices for the upcoming League One clash have thus been confirmed as: