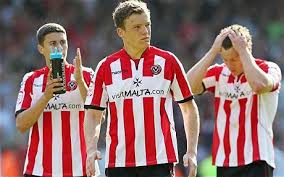 It’s a rare treat for the Iron to be able to look forward to a re-arranged game, but this might just be one.

For Scunthorpe United have finally announced the date of our re-arranged League One crunch clash with Sheffield United.

This is following the original game having been cancelled due to Sheffield United’s involvement in the 4th Round of the FA Cup on the date that the tie was first due to be played.

The clash has thus been finally re-arranged, and will be played on Wednesday 29th February.

The game will take place at Brammall Lane, with a 7:45pm k/o – in what is Scunthorpe United’s shortest away trip of the entire season.

Scunny will be hoping to be able to continue our excellent record against the Blades – with 5 wins and 2 draws having come from our recent clashes in the Iron’s favour.

The game will also be the first time in our recent history that we’ve played a game on a leap day.

It’ll hopefully be a chance for the away fans to see David Mirfin and Jon Parkin amongst others in action for the Iron. And with it being our current game in hand, then results are definitely key – as Scunthorpe try and desperately drag themselves away from the relegation zone.

The information regarding the tickets for the game have not yet been released, but as soon as they are – we’ll update you on Any Old Iron!

So let’s get praying for another 3 points at Sheffield United!