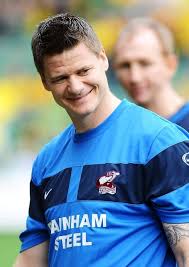 It appears to be already a very busy January for Scunthorpe United. Not content with 1 in & 1 out up front, future activity is already imminent.

Not coming as any surprise, it’s been revealed that Michael Nelson is soon to be departing Glanford Park having fallen out with current gaffer Alan Knill. It’s expected that the Geordie-born centre-half & ex-Iron skipper will be heading North to the SPL.

Specifically, the Perth-based Kilmarnock are the current front-runners that Mickey N & his representatives are chatting with.

That said – and as Any Old Iron first revealed to you here: http://www.anyoldiron1.blogspot.com/2012/01/agent-admits-nelson-exit-imminent.html – with Scunny briefing all interested clubs that Nelson is available on a free transfer, there may well be numerous interested parties.

Given that Nelson is in his early 30s with young children, it is expected that he will go to whatever club offers him the most cash over the course of their contract.

Rather eerily, there have also been no noises as yet coming out of Glanford Park of a replacement centre-half to be signed by us for him.

This is very dangerous and worrying given also that Shane Duffy has been recalled by his parent club, and his expected to be with Everton for close to 2 months. Scunthorpe cannot afford to risk having only 2 centre-halves for that period of time.

Nelson’s exit, which Knill has been attempting to engineer for a long time, (remember when he turned down a Bury loan move?), has been labelled as purely an attempt to cut back, and restructure Scunny’s wage budget. Forgive us for our skepticism!

Nelson’s spell with the Iron has been fair – and imperious performances from him this season: and given lack of depth, you really do worry. Just a shame that Knill can’t bury the hatchet and utilise a quality centre-half when he’s available.

With vital experience – Nelson should be an asset, not a liability. But with Knill’s insistence, (fair or otherwise), that all centre-halves must be the basis for the tiki-taka football the Iron have been pursuing. Whether any League One centre-half in all existence is good enough to be able to do this – let alone ones short on confidence, is a very moot point.

Arguably, the club ought to look into signing 2, at the very least in the short-term, to try and build momentum and have anything like strength in depth at the back. Let’s just hope that the pair of Niall Canavan & Paul Reid can cope meanwhile!

That said – following the returning of Oliver Norwood to Manchester United, it is expected that a replacement signing in central midfield is imminent.

Despite relative abundances in quality in there – it seems a CM is top of Knilly’s shopping list – or is nearest to the counter of completion in the supermarket that is the January transfer window.

Josh is a box to box midfielder currently on Watford’s books, having previously spent time with Middlesbrough – and this season: on loan at Graham Westley’s surprise-package Stevenage.

Following a seemingly very successful trial with the Iron – Scunthorpe are currently in negotiations with Watford trying to pick Walker up on the cheap. And given Josh’s pariah status in Hertfordshire, who can blame us?

With a successful track record on his previous signings – and with Damien Mozika seemingly injured for a while yet, let’s just hope that when Knilly hails Walker as as good technically as anything we’ve got at the club, that he can be a success.

Since Walker captained England at every level up to U/20 no less: there is clearly talent in there, but let’s just hope that we can pull a rabbit out the hat and manage to resurrect his career.

In the process, he might even resurrect us. Who knows!?