Any Old Iron preview the Iron’s clash with Hartlepool

The North East club are currently sat comfortably above the Iron in 12th place in the League One table.

The game will take place this Saturday, on the 19th of November: with a 3:00pm kick off.

The Iron:
Anyone remember this Iron v Hartlepool win?

It’s been a long time since Martin Carruthers’ 2nd of the game set the Iron on to a famous 4-0 home win against Hartlepool, but wouldn’t all concerned with the Iron love another day like this on Saturday?

But the Iron will be hoping to simultaneously build momentum and bounce back. It can be 2 home wins on the bounce if Hartlepool are vanquished, following the 4-2 win over Tranmere a fortnight ago.

Equally however, a disappointing defeat away to Bournemouth – followed by a limp draw away to AFC Wimbledon: with the Iron drawing blanks in both, means that results are imperative.

Especially with the Iron sat in 17th.

Scunthorpe will also be hoping that they can beat Hartlepool at home for the 2nd time this season, having sent Mick Wadsworth’s men crashing out of the 1st Round of the Johnstone’s Paint Trophy at Glanford Park, back earlier on in the season.

Alan Knill’s men are hoping to have both Andy Barcham & Paul Reid back from their respective injuries – although both missed the AFC Wimbledon clash: it is nonetheless expected to be a matter of time before the pair return. Whether or not either start against the Monkey Hangers is another thing entirely.

Both Cliffy & Robertson are slowly eeking themselves back to recovery, although neither have actually set foot on the pitch again yet: so if they’re properly ready or match-fit remains very sceptical.

Returning thankfully though, will be Shane Duffy – who has returned from his international duty venture out in the wilderness with the Republic of Ireland Under 21s. 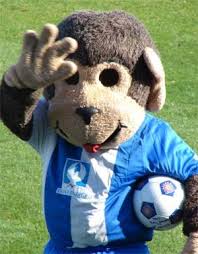 We always like a funny fact or two on Any Old Iron – and not only is the above mascot: H’Angus the Monkey.

Originally, it’s called such because the Hartlepool locals were famous for having hanged a monkey back during the Napoleonic War – on the suspicion that the monkey was in fact a French spy!

Not only that: but from 2001-2009, this very monkey was the town’s twice elected mayor! Standing on a platform of Free Bananas for all schoolchildren – the mascot and its incarnate were re-elected twice by the native people of Hartlepool: beating all 3 major political parties in the process.

Not only was he responsible for a huge spike in turnout, but was able to increase his vote massively in the process.

Mandelson as MP, and a monkey as mayor – what representation!

Back in 2001, the mascot was famously kicked out of Glanford Park after leading the supporters during songs, and simulating sex with a female steward. Me thinks the stewards need to mellow a bit!

But for the clash on Saturday, the Monkey Hangers are definitely without strikers Nish & Larkin, both still remaining on the treatment table.

They’ll be looking to cement their place in the top half: and revenging their earlier away defeat to the Iron in the process – with manager Mick Wadsworth insisting the club had no fear on their travels.

That said, the fact that the manager has had to insist this obviously indicates that an underlying problem is still nonetheless still there for them.

Key playmaker James Brown, (he of Geoff Stelling fame), is also likely to miss out through injury – but they do have Paul Murray back available again after he has returned from suspension.

It is going to be a tough one for the Iron, but these are exactly the types of games that Scunny need to be winning at home, if they’re to stand half a chance of being even moderately successful in the league.

We’ve predicted the last few right – including the Tranmere & Huddersfield games respectively, so we want to be feeling optimistic!

And if the right Scunthorpe turn up, there’s no reason not to be. But it’s offensively where the problems lie – in their aim to score for the first time in over 180 minutes.

We think it’ll be tight, but that the Iron will nick it just. Just like earlier on in the season with any luck.

So let’s hope that the Hartlepool mascot has as miserable time as he did back in 2001 and 2003!