We’ve got a treat for you here on Any Old Iron – an exclusive interview with AFC Wimbledon fan Pier Barrett, (@PierBarrett), who chats to us about everything Dons ahead of the Iron’s FA Cup clash!

What’s been the best part of seeing AFC Wimbldeon rise from literally nothing, to being back in the Football League? Too much to say to be concise! I guess there is a part of me that really enjoys answering the “what football team do you support then?” question, and having a fairytale story to tell in the subsequent conversation. Smug, I know!

Now you’re back – what’s your hopes for the season and the future?
This word of the season is “consolidation”, but then again, that word seems to have been bandied about more than once since 2002. There was talk about a month ago of making the playoffs but frankly, most people I’ve spoken to are just glad to be back. Personally, I’d be happy with just staying up.
‘Mid-table mediocrity’ for a few seasons wouldn’t do the club any harm and I don’t think any fan would mind – we’re all just looking forward to being normal again. There’s no reason why we can’t aim to get promoted to League One but we will never know our ‘natural’ level until we’ve settled down into a new home in Merton.

What do all your fans think about your manager Terry Brown?
Hero. You won’t hear a single word against him in the ground. He took over the club when a period of stagnation threatened: we were in our third season in the Ryman Premier and not looking too set to be promoted. TB pushed us through a tense playoff final against Staines and from there, our rise has been smooth yet metioric.

What he has achieved with very little financial resources, the talent he has – and the faith he has show in players that once looked near hopeless, yet later turn out to be gems – is a testament to his skills as a manager. That he is an incredibly friendly and affable man with every fan that approaches him is an added bonus.

Who do you think your star player has been so far this season?
A lot of names I could mention but the stand out for me has been Jack Midson. No other player had bigger boots to fill than Jack. I felt almost sorry for him when he first signed: there was a huge weight of expectation on his shoulders from the fans.

Even if he got a goal here and there and played a few decent games, he would still have committed the crime of not being Danny Kedwell. (sold to Gillingham in the summer).
Yet he got his head down and became one of the League’s top scorers from the get-go. He’s developed a great partnership with, and has mentored fellow forward Christian Jolley. He finds himself in the right positions at the right time and he always looks like he’s enjoying himself when he’s playing.

What do you think your team’s biggest strength is?
Jolley and Midson up front. Then followed by keeper Seb Brown.

How do you think Saturday’s FA Cup tie will go?
Despite recent (poor) form, a lot of Wimbledon fans will feel upbeat about the FA Cup. I’ll make no apologies for my baseless optimism: 2-0 to Wimbledon!

What do you know about Scunthorpe?
You beat Franchise, (MK Dons), in the play-offs. You’re from the North. 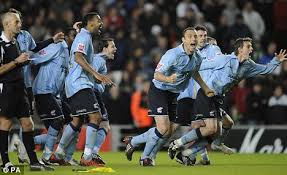 Any tips for away fans?
Be prepared to see very little of the game. Our ground is too small for us and the terracing you will be given is quite poor. At it’s worst point, your view will be blocked by scaffolding from the gantry and the low roof means you won’t see the ball if it goes above head height. If you want to see any of the game, try and stay in the uncovered section by the corner flag.
I’d throughly recommend not parking at the ground and finding somewhere far far away to park. Traffic before and after the game is a nightmare. If you need to drive, try parking in some of the multi-storeys in Kingston and getting the bus down. I’d recommend getting the train to Norbiton (from Waterloo or Clapham Jct) and walking 8-10 minutes to the ground from there.
Foodwise, the food at the ground is your standard fare of over-priced chips and burgers. If you’re looking for something quick I’d recommend the Fish and Chips shop near the entrance of the ground or the Fried Chicken place at the corner of Gloucester and Cambridge Road toward the station. For something more substantial, there is a legendary greasy spoon called “FatBoys” right next to the road leading up to the ground that serves everything you’d expect and more but is inevitably full. More varied and nutritious food can be sourced in either Kingston or New Malden.
Normally, away fans are allowed to drink in the bars before the game, (although this may change for a ‘big’ game such as this) {!}. If you can, I’d recommend it, nearly always a good atmosphere before the game and the home fans don’t bite.

Other than that, there are various pubs along the Cambridge Road in various states of disrepair. The Fountain at the New Malden end is sizeable and has live sports. The Sir Robert Peel has been a favourite for a number of away fan contingents, when you walk through the door you’ll realise why (translate: “not for young families”) {!}

Do you regret still not playing in Wimbledon?
Yes, it rankles more than anything else – but the fan-elected board who run the club have made a return to the London Borough of Merton, (To Wimlbedon what North Lincs is to Scunthorpe), a priority. Whether this means a move back to the old home of Plough Lane or another ground in the Wimbledon area of the borough, no one can say, but there will always be a hunger to return.
People who are my generation, were the first ones to miss out on seeing Plough Lane. (Wimbledon’s old home ground). That we clamour as much for a return to Wimbledon as much as those older than us, means this issue will never die.
After all, AFC Wimbledon’s existence is not just to vindicate what happened in May 2002 but to prove that League football can work and grown in Wimbledon – something that past owners of WFC never accepted.

10) And last but not least…….. Tell us something about AFC Wimbledon that not a lot of people know!
A nice topical one (but that many have now clocked on to) is that Glenn Mulcaire, the private investigator that hacked into phones on behalf of the now defunct News of the World scored AFC Wimbledon’s first ever goal (and what a belter it was:
http://www.youtube.com/watch?v=jUxSuHPDbKk&feature=related).
We hold the longest run, (78), of unbeaten competitive games for a senior team in all English football that stretched between Feb 2003 and December 2004.

We hope you enjoyed the interview with Pier, (you can follow him on Twitter at @PierBarrett), whom the Any Old Iron team are very grateful to for kindly informing all Iron fans a little bit about AFC Wimbledon.

And this type of article is one that we’d be very interested in running – so if you’re a reading fan of any of the clubs the Iron have got coming up soon, (Hartlepool, Notts County etc), then get in touch if you’d like to contribute to the inside fan preview!

Feel free to e-mail the Any Old Iron team at: anyoldironblog@gmail.com

One thought on “AFC Wimbledon Inside Fan Preview”