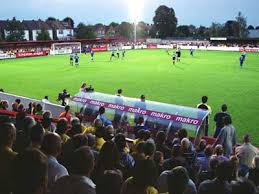 With the tickets for the Iron’s FA Cup game on sale, it’s been revealed that they’ve been selling like hot cakes with the eager Iron fans.

As Any Old Iron first revealed here:
http://anyoldiron1.blogspot.com/2011/11/full-cup-info-clash-details-finally-out.html – the tickets are on sale, with Scunthorpe given an away allocation of just north of 700 tickets.

Out of these: over 300 have already been sold, all down to a few season ticket holders eager to ensure a ticket to the party down in Kingston-upon-Thames.

So for all Scunny fans who want to get down there to see the FA Cup clash – make sure you book as soon as  possible to minimise the possibility of disappointment.

The tickets go on sale to Members today, and will as such be on General Sale from tomorrow. It is hoped that Scunthorpe will sell the lion’s share of their allocation for the away trip down to League Two AFC Wimbledon.

This is particularly impressive – for even excluding the straightened and toughened times, (especially in the run up to Christmas!), but Scunthorpe have been patchy at best over the season’s course. And the less said about Saturday’s loss away to Bournemouth the better.

But let’s hope the men of Iron can bounce back with a bang – and a progression to the 2nd Round of the FA Cup….