Any Old Iron preview the Iron’s clash with Huddersfield

The Wirral club – managed by their ex physio, currently sitt in 6th place, and will no doubt be looking for revenge.

The game takes place on Saturday 29th October, and will kick off at 3:00pm.

Will there be a moment quite like this ever again?

Forgive the nostalgia, but with Cliff Byrne’s 88th minute header back in May 2009 still providing fresh memories – (it was the last time the 2 sides met) – was a peak moment in any Iron fan’s memory, so let’s just relive it for a touch longer!

This will no doubt have Tranmere travelling for revenge, but there aren’t many survivors from that Iron side at all sadly.

Indeed: comparing the expected line-up, only Sam Togwell will have started in both. Slocombe was on the bench back in 2009, (Murphy was injured), Lillis is injured currently, as is the heroic Cliff Byrne, (bench at best sadly), and Garry Thompson only came off the bench, (don’t be surprised at a repeat).

The rest, unsurprisingly: have retired, left or both…

Amazing to think how quickly things change isn’t it!

And the Iron will be hoping for an equally swift dart up the table – looking for only our 3rd win so far this season: currently languishing in 16th – having drawn 9 out of 15 games.

Limited changes from the Huddersfield draw are expected: the main unknown being as to whether Sam Johnstone will recover from his dislocated finger in time – and even as to whether he can justifiably replace Slocombe after the latter’s two impressive recent performances.

Despite Shane Duffy & Paul Reid both missing training on Thursday as a precaution, it is widely expected that both will start. But even if neither does: both Niall Canavan & Michael Nelson are extremely capable deputies.

It’s still a fairly long list of misssing for the Iron as well – with all of Josh Lillis, Damien Mozika, Jimmy Ryan, Jordan Robertson and Matt Godden all still definitely set to miss out due to injuries. 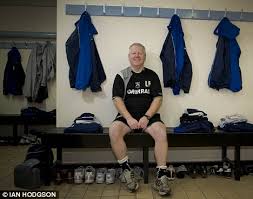 You’d never believe it, but that bloke with the podge – who insists on wearing shorts, is actually a PhD.

The ex-Tranmere physio, (he was still the physio back for the Byrne header): and whilst Parry might try to play down revenge, he almost certainly knows he’d never have been in this position – if it wasn’t for the nonsensical sacking of Moore that Byrne’s header immediately prompted.

With a PhD in “The effects of de-training following injury” – which in a way, almost certainly makes him the most qualified manager in England!

But Dr Parry, nicknamed Dr Defensive by some: has guided them to safety a couple of times – and now has the Rovers in 6th and staring upwards in dreams of something more.

They’ll be missing Enoch Showunmi through groin trouble – and midfielder Mark Devaney will also be absent with a hamstring problem: and Mark McCrystal is a doubt.

The Wirral club signed the Iron’s rejected trialist Mustafa Tiryaki on a free in the summer: and if Parry goes for 4-4-2 (unlikely), then he’ll partner Everton loanee José Baxter up top.

José has had his loan spell recently extended – and Shane Duffy, an Everton youth team-mate, will have to do extremely well to deal with the in-form youngster.

Let’s just hope that the Iron fans can end as happy as the last two times we played Tranmere at home!

Noted for being steely at the back, the Iron’s visitors on Saturday are more like Dickov’s Oldham than any other side we’ve played this season: so Knill’s men will have to do extremely well to prevent another repeat of the results.

Following the late change of ref: the Iron will also hope for a change of fortune, but that will have to be backed up by clinical finishing and defensive steel. We’ve as yet only managed one or the other so far this season. And only rarely at that.

We’ll be brave a plump for a 2-1 Iron win, and apologies in advance for jinxing it: although we did predict the Huddersfield draw right as well…