So then, an unusual title – I know, but it really is this.

Can’t beat a little bit of dreaming of Iron!

Any Old Iron’s team, were thinking about all the fantastic away days with the Iron: the football, the spirit – the camaraderie and how it makes a club like Scunthorpe really tick, and different from all those around it. The wonderful memories and days.

This is even more so than the fine days Glanford Park has brought us: and separates us from those glory-supporting clowns, who view anything else than away to Barcelona with contempt.

And when it comes to seeing all 92 dreams of Iron satisfied – that is somewhat difficult, but not wholly impossible. We loyal to Scunthorpe United have been lucky of late, for post 2005 we’ve been 1, if not 2, divisions above our clichéd historical average. Not bad eh!

So what Scunthorpe fan honestly thought that they’d see us take on Newcastle, Derby, the Sheffield clubs, Leeds – and so many more. All as equals, and many as equals post an Iron’s relegation!

With the mighty Iron’s rise up the leagues, it’s given so many fans – especially the older generations, opportunities to sample up to 3 divisions worth of great memories.

Assuming the Conference et al can count as well, (so many of us have travelled to Grimsby, Cambridge, York, Wrexham etc), how many have you been lucky enough to crawl to, and what are your greatest memories of it all.

Having seen the Iron take on 5 of the Premier League at their grounds very recently, (if you travelled to Stoke, Wolves, Norwich or Swansea then its 9!), but I can count 6 – having gone to Swansea’s old ground. Technically anyway. 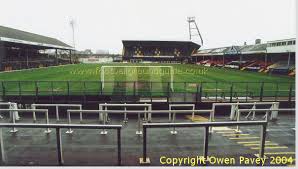 Any old Iron fans might count the likes of Wigan & Fulham on that basis, with their multi-millionaire money bags having shot them up the leagues like a balloon. Not bad for some eh?

But as Man City fans have found out – throwing in unmitigated cash rips the soul out all too often. David is still a far better role to play than Goliath. Especially in the Championship! Just ask all those fans who’d seen the great upsets – home and away how they felt. 10 feet tall no doubt.

Let’s take the current League One table as it stand as example.

The Iron are still a small club – and this author alone, (a feat that won’t be too extraordinary with the Iron away followers): has seen us play at:

This of course doesn’t even include the upcoming trips to the likes of Brentford, Bournemouth and Exeter!

But speak to any fan and they’ll wax lyrical about the penalties at MK, O’Connor’s free kick at Preston – Wooly’s at Sheff Utd to make it 4 – Sharpy celebrating at Yeovil and so much more.

Indeed- that’s just in the past few seasons. And this is what makes the Iron unique.

Even off the pitch – we all have similar stories. Singing post Rochdale despite the defeat, being chased out of Preston by a gang of youths, the bouncing coach back from MK and so many more. These are what builds a club as a community and crafts us into the great family of friends the Iron truly is.

How could I forget Iriekpen’s equaliser at Charlton!? Oh what memories. My Izzy……

You’ll all have similar stories to tell. Indeed, just with those few there are so many stories we all would have to leave out. Through sheer weight of numbers, or that we daren’t print them.

Let’s take a quick glance at the table. And even if you discount those people with attendance records far more spectacular and consistent than Any Old Iron’s, we find ourselves dreaming of the treks to:

Speak to any fan of Iron and it brings tears to your eyes – the dreams, the friendships and so much more.

This is the magic of the 92. For when it comes to football, it really is about so much more than the result – and who knows, maybe those of us lucky enough might end up seeing the Iron playing away to a fair few more.

From Manchester United to Morecambe – they’ve not yet had the pleasure!

But christ – that 4-1 January win in the snow? Dancing past the sandpit at the Withdean, the female steward at Cardiff, the sand of Blackpool, O’Connor’s amazing winner at the KC, Hoops’ 2nd at Leeds, the amazing Nunez at Palace. God it’s bringing me to tears!

Even the tube to Millwall…… But that’s so much more of what supporting the Iron is all about.

Being a football fan is slightly more fashionable than it was 25 years ago: but there is still a taboo at this level of dedication right? But you know what. I know I wouldn’t, and am sure you wouldn’t, swap any of those for the world right? Right!

What would be your favourite – even the Lincs Cup shootout win at Grimsby rolls it all back!

And it continues with Brentford on Saturday. And it should be epic. Even if the train ends up in Plymouth by mistake, or the Iron scrape a point – it will all be as fantastic as it always is.

We’ve not even spoke of the fans yet. The Marlon King chant at Coventry, the electric atmosphere that so many create and adore away from home. The beach at Portsmouth, and the dedication showed by so many – and the loyalty to Baraclough above all else.

So then – are you still dreaming of Iron? I know I am!